This is a picture of a letter that was written by a son to his father back in March of 2014. It took another two years before the son was certain that the traditional “Oneness” doctrine did not represent the whole truth of the Apostle’s doctrine. 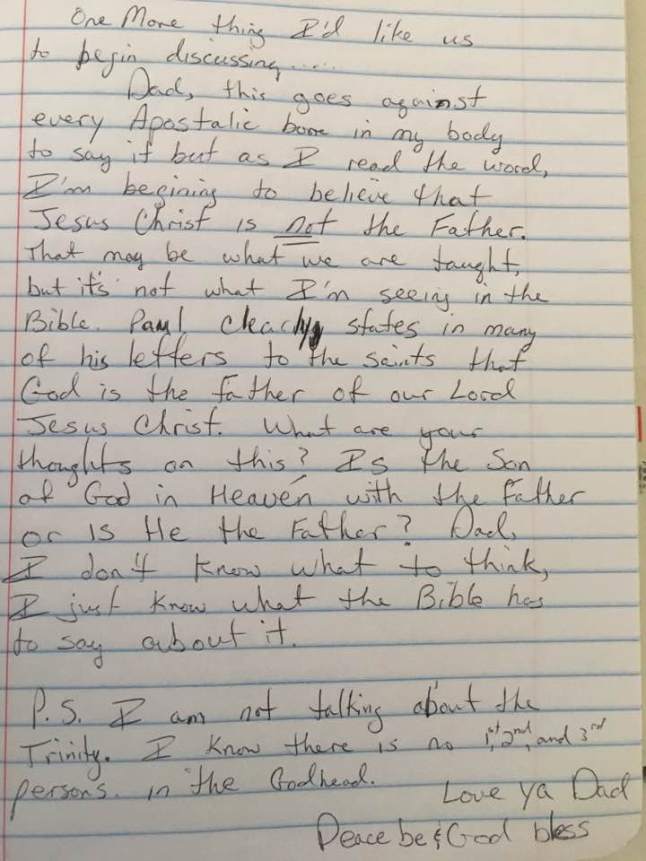 When asked “did your dad accept your sincere desire to show him what GOD had revealed to you?”

Here is the son’s testimony:

At first he ignored my comment. He wrote me back, but didn’t even mention what I had written concerning this. He eventually began to try “helping” me see the Oneness in our phone conversations from time to time, over the course of 2 years. One day, after I had professed I was certain of my beliefs, we got into it pretty deep. After what may have been a hour or so, he said to me, “Son, God was in Christ reconciling the world unto himself.” I replied, “Yes dad, it says God was IN Christ, not God was Christ.” He said a few more things after that, to which I very gently replied, “Well Dad, I just don’t see it like that anymore.”

We didn’t talk for a few days after that, but then out of the blue he called me, and sounded very excited. He said, “Son, I can’t believe this, but after 40 years of preaching this doctrine, I see I was wrong. “Jesus is the Son of God!” He later went on the tell me that when I told him, “Yes dad, it says God was IN Christ, not God was Christ,” something within him broke. He tried to fight it but my soft words at the end of our conversation caused him to “go back to look at it again,” he once told me. After a few days, it was clear to him, that he had missed it.

Needless to say, he and I are enjoying this journey together.

Here is the father’s testimony:

Yes, son I do….It was your love and gentleness that touched my heart…. when I said….”God was in Christ”, and your said ” In Christ ,not was Christ” that opened my eyes…. Since then I understand…..Jesus Christ is not the Father……

John 20:31, These things are written that ye may believe that Jesus is the Christ, the Son of God.

The Jewish people were waiting for a man, like Moses to come and speak God’s word to them. Deut. 18:18 ….the LORD will send a prophet like unto me….(a man).

Jesus is a man not the Father. God the Father is a Spirit.
I’m still learning……but I can see it