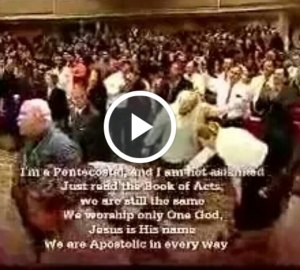 Above is a popular refrain sung in Apostolic Oneness churches.

Well, am I a Pentecostal? Yes! Am I ashamed of this fact? No!
Do I worship one God? Yes! What is His Name?

Let’s look at the evidence:

On the Day of Pentecost, Peter said nothing about God being Jesus or God’s Name is Jesus!
Paul came along later and again said nothing in the Book of Acts that God is Jesus or Jesus is God’s Name!

The truly Pentecostal Peter proclaimed in Act 2:22-24 that Jesus of Nazareth, was a man approved of God among you by miracles and wonders and signs, which God did by him in the midst of you; who was crucified and slain:
24 Whom God hath raised up;
God made him Lord (Acts 2:36) according to the prophecy spoken of in Psalm 110:1 (the most quoted OT verse in the NT).

Saul (yet to be named Paul) having his eyes opened according to the Book of Acts, straightway preached Christ in the synagogues, that he is the Son of God
(Acts 9:20).

In Acts 14:6ff when Paul and Barnabas were in Lycaonia; God used Paul to do a miracle in healing a lame man who had never walked. The response of the Lycaonians was overjoyed. It took a while before Paul and Barnabas realized what the commotion was about. When Paul and Barnabas did perceive what was happening, they rebuked the Lycaonians immediately saying “Sirs, why do ye these things? We also are men of like passions with you, and preach unto you that ye should turn from these vanities unto the living God (remember this phrase – see footnote 2), which made heaven, and earth, and the sea, and all things that are therein” – Acts 14:15.

So what was it that the Lycaonians were saying to warrant such a rebuke?

Answer: They were calling them “gods” that is, they called Barnabas Jupiter (Greek name: Zeus) and called Paul Mercury (Greek name: Hermes) – Acts 14:12.
The Lycaonians proclaimed The gods are come down to us in the likeness of men – Acts 14:11.

[Acts 14:11 is describing INCARNATION! Incarnation was a well established teaching as part of the Ancient Greeks’ beliefs in their mythological (i.e. false) gods]

“There is solely ONE GOD who has come down to us in the likeness of men
and His Name is JESUS!”

Again I say, IF the Apostles were Oneness (see footnote 1) surely this would have been the perfect opportunity to proclaim the above! However they said no such thing!! In fact, they didn’t even mention Jesus at all!! Selah!

What was the Apostles’ response? Turn from these vanities (i.e. Repent) and turn unto the living God, the Creator of all things.

What gives? I thought the Apostles were Oneness – Acts 14:14-18 is not a Oneness response! – I’ll call this WITNESS No.1

Again, let’s be honest. Any Oneness preacher given that opportunity would make it very clear that:

there is solely ONE GOD and His Name is Jesus!

So what did the truly Apostolic Paul say?

Acts 17:24 God that made the world and all things therein, seeing that he is Lord of heaven and earth, [cp. Matt 11:25, Luke 10:21] dwelleth not in temples made with hands; 25 Neither is worshipped with men’s hands, as though he needed any thing, seeing he giveth to all life, and breath, and all things; 26 And hath made of one blood all nations of men for to dwell on all the face of the earth, and hath determined the times before appointed, and the bounds of their habitation; 27 That they should seek the Lord, if haply they might feel after him, and find him, though he be not far from every one of us: 28 For in him we live, and move, and have our being; as certain also of your own poets have said, For we are also his offspring. 29 Forasmuch then as we are the offspring of God, we ought not to think that the Godhead is like unto gold, or silver, or stone, graven by art and man’s device. 30 And the times of this ignorance God winked at; but now commandeth all men every where to repent: 31 Because he hath appointed a day, in the which he will judge the world in righteousness by that man whom he hath ordained; whereof he hath given assurance unto all men, in that he hath raised him from the dead. 32 And when they heard of the resurrection of the dead, some mocked: and others said, We will hear thee again of this matter.

Jesus is not even mentioned! He is implied as “that MAN” whom the ONE GOD, The Creator, the Lord of heaven and earth; raised from the dead and ordained to be the judge of mankind.

There is simply no mention that Jesus is God much less that his name is the name of the One God! Again, Jesus is not mentioned at all. Paul who is undoubtedly an Apostle, obviously is not Oneness at all!  Selah! – WITNESS No.2

… in the mouth of two or three witnesses every word may be established.

So my dear reader, this is the decision  by God’s grace that we all have to make. It is not about defending a cherished doctrine or an ideology regardless of how scripturally sound or how biblical it may appear. Rather it is about truth!

John 17:17 Sanctify them through thy truth: thy word is truth. 18 As thou hast sent me into the world, even so have I also sent them into the world. 19 And for their sakes I sanctify myself, that they also might be sanctified through the truth. 20 Neither pray I for these alone, but for them also which shall believe on me through their word;

Mat 16:16-17 And Simon Peter answered and said, Thou art the Christ, the Son of the living God. 17
And Jesus answered and said unto him, Blessed art thou, Simon Barjona: for flesh and blood hath not revealed it unto thee, but my Father which is in heaven.

Matt 11:27 All things are delivered unto me of my Father: and no man knoweth the Son, but the Father; neither knoweth any man the Father, save the Son, and he to whomsoever the Son will reveal him.

Jesus the Messiah, the Son of God revealed himself to his disciples and in turn the Apostles declared the truth throughout the Book of Acts, declaring who Jesus is as well as the truth about the one God.

This one God is the same God of Abraham, Isaac and Jacob of the Old Testament who now in the New Testament  has glorified His servant Jesus (Acts 3:13)

Acts chapter 2 has to be the most quoted chapter in Oneness churches. With this in mind I now invite the reader to listen to a sermon which is an exposition of Acts chapter 2.

Audio: From Oneness to One

Please prayerfully listen to it and be Berean about it – that is, search the scriptures daily to see whether these things are so – Acts 17:10-11

In this article I am dealing specifically with the Oneness doctrine; however the facts also show that the trinity doctrine is unscriptural. God can only be one being, one person according to Deuteronomy 6:4. This was Jesus’ understanding as well as all believing Jews of biblical times – Mark 12:32 – And the scribe said unto him,
Well, Master, thou hast said the truth: for there is one God; and there is none other but he:

In short, trinitarianism has never worked and never will!

Seeing how Paul scathed the theology of the Lycaonians and told them to turn from these vanities unto the living God;  the following two verses are apt in clearly showing the Apostolic mindset of Paul in regards to the living God and Jesus:

1 Thess 1:9 For they themselves shew of us what manner of entering in we had unto you, and how ye turned to God from idols to serve the living and true God; 10 And to wait for his Son from heaven, whom he raised from the dead, even Jesus, which delivered us from the wrath to come.